The Epistles of “Paul” revered by Protestants probably weren’t written by Apostle Paul.

This shocking assertion was made not last week by some liberal preacher or village atheist, but over a hundred years ago by Willem Van Manen, one of the “Dutch Radical” New Testament critics of the late nineteenth century. His English-language essays are very instructive about his views on the “Pauline” epistles, and Tellectual Press has published them in A Wave of Hypercriticism.

The book was compiled and edited by Robert M. Price from digital files provided by one of his fans, Steven Stiles, who’d done OCR work on the van Manen essays from scans of musty old pages. Bob wrote an Introduction and Afterword to the compilation and oversaw Ed’s efforts to make van Manen readable by splitting up his monumentally long paragraphs. It’s available for the Amazon Kindle, the Barnes & Noble Nook, and in trade paperback.

Van Manen “began as a skeptic, eager to debunk and to refute” those few of his fellow countrymen who were questioning Paul’s authorship of even the so-called “undisputed” epistles, says Dr. Price in his Introduction. The deeper van Manen “delved into the issues and the arguments, the more he began to see their point and, worse yet, to suspect they were right.” Van Manen was finally able to shrug off the shackles of pious obligation, directing himself, as he urged others in 1898, to undertake “free and impartial research as to the authenticity of the Pauline leading epistles.”

If you want to get “acquainted with the Pauline lead­ing epist­les” for the pur­pose of ar­riving at “a possible answer to the question as to their origin,” van Manen urges you to “read and study them according to form and contents without cher­ishing beforehand a decided opinion as to their origin.” Simple, sensible advice. Who can argue with it?

Yet how many Bible readers and pro­ponents (the lat­ter category far out­numbering the former) are mentally capable of such a dramatic step, even today? They “cherish beforehand” a most decided opinion indeed, not just about Romans, Corinthians, et al., but the entire motley collection of sixty-six ancient books. Many have a hard time acknowledging any flaws in the supposedly inerrant “Word of God,” even about the most blatant and transparent contradictions.1

Whether they “begin by accepting the authenticity or not,” van Manen admonished his fellow scholars to “always leave room for the opposite opinion.” Otherwise, their attempt to explain the text “is not free but bound, bound to tradition, bound to fiction.” You can see why even liberal Protestants have a hard time with this. What’s at stake, says Dr. Price in his Afterword, “is the undermining of the very foundation of Protestant theological authority: the Apostle Paul.”

Despite the claims of Christian fundamentalists that the Bible is inerrant and inspired, there have been waves of questions lapping at their scriptural foundations for a long time now. As have the complaints from those trying to keep things propped up, like this one from the second century A.D.: “Now this heresy of yours does not receive certain Scriptures; and whichever of them it does receive, it perverts by means of additions and diminutions, for the accomplishment of its own purpose; and such as it does receive, it receives not in their entirety.”2

For all his literalism, sola scriptura, and fervent medieval piety, Martin Luther did a bit of picking and choosing about the Bible himself, five hundred years ago. Most famously, he disliked the Epistle of James with that business about faith without works being dead. James, Luther said

does nothing more than drive to the law and its works; and he mixes the two up in such disorderly fashion that it seems to me he must have been some good, pious man, who took some sayings of the apostles’ disciples and threw them thus on paper; or perhaps they were written down by someone else from his preaching.

That wasn’t all; Luther wrote that he could not put Hebrews “on the same level with the apostolic epistles,” noting that some of its teachings seem “to be against all the Gospels and St. Paul’s epistles.” Jude clearly seemed to him a copy of 2 Peter, and he also had problems with Revelation and Esther. 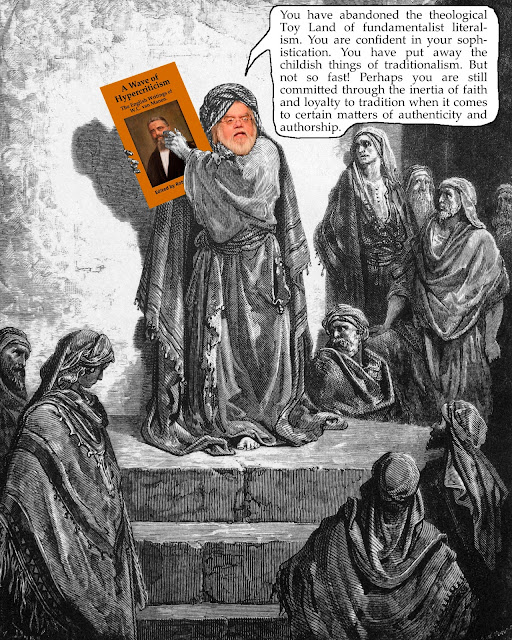 One of the many theological squabbles Luther got himself into was with the humanist Catholic reformer Desiderius Erasmus, who was “perhaps the real progenitor of what would become the thoroughly modern approach to reading the Bible,” the Higher Criticism.3 This approach led to questions about Moses and then Jesus. Had Moses really delivered the 613 commandments of the Torah? Had Jesus really preached the Sermon on the Mount? Or were these much later collections of material from disparate sources?4

By the early 1800s, some of the epistles that had been attributed to the Apostle Paul were being questioned. Now this was a big deal, because the Pauline epistles are critical to Protestant Christianity.

As Dr. Price puts it, Paul was not crucified for you, but it is Paul who tells you what Jesus’ death meant. He summarizes what the 19th-century critics were doing to Paul in The Amazing Colossal Apostle. The first to deny Pauline authorship to one of the epistles was Friedrich Schleiermacher (1768-1834): “Although he accepted 2 Timothy and Titus as Pauline, he rejected what he termed ‘the so-called First Epistle of Timothy.’ In an 1807 essay, he showed how this epistle contradicted all other Pauline materials in the New Testament.”

Before long, “other scholars widened the scope of the investigation and discovered many of the same relations and contrasts between the Pastoral Epistles (1 and 2 Timothy and Titus) on the one hand and the remainder of the Pauline letters on the other. Today, virtually all critical scholars agree that the Pastoral Epistles are not the work of the historical Paul.”5

Then F.C. Baur (1792-1860), “the founder of the Tübingen School of New Testament criticism, whittled down the Pauline canon even further.” He was left “with only the four Hauptbriefe (‘principal epistles’), 1 and 2 Corinthians, Galatians, and Romans, as authentic and unassailable, minus a few questionable passages here and there.”6 The waves were getting stronger, crashing against the old foundations that Luther had lain. But at least his cornerstone, Paul’s Epistle to the Romans, remained. It was, Luther said in his preface to Romans, “the most important piece in the New Testament. It is purest Gospel.”

Around the turn of the twentieth century, along came a “wave of hypercriticism” from some impudent Dutch theologians. Nothing was to be spared, not even the Epistle to the Romans. Van Manen was notable among these critics, the so-called Dutch Radicals. In his 1898 essay, he observed of the situation, “Was it not enough that criticism had left untouched only four authentic epistles” in the New Testament? The critics had been a demanding bunch, now that the penalties for questioning Holy Writ were limited to verbal attacks and no longer involved a gruesome and painful death.

Their efforts were not appreciated by the old guard:

“Righteous” indignation, reason­able trembling, ill-concealed con­servatism, joined hands with luke­warmness and lack of desire for impartial research. Yet the fact cannot be denied that this wave of hypercriticism is rejected by the “best critics of Germany.” But rejected does not mean destroyed. The scruples mentioned are not done away with, the arguments are not weakened.

Van Manen’s 1898 essay is one of a few that he wrote in English, which have seen little exposure. Perhaps our little orange book will help change that just a bit.

Dr. Price suggests “that the revolutionary hypotheses of van Manen were never given a chance.” He thinks “it is not that the Dutch Radical critical paradigm was tried and found wanting; it was found distasteful and not tried. But the rationalizations of our vested interests lose some of their hold on us if we come to recognize them for what they are.” He hopes that “the time is finally ripe for van Manen, once dismissed with scorn like Nietzsche’s mad prophet, to receive his due and a sympathetic hearing. Like light from the farthest stars, his shocking tidings have taken a long time to reach us, but perhaps now we are ready to see and comprehend”7

Get A Wave of Hypercriticism for your Kindle:

Evolving out of Eden